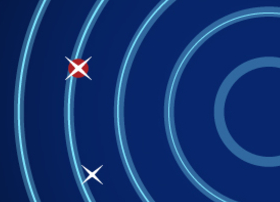 The National Aeronautics and Space Administration (NASA) Space Communications and Navigation office (SCaN) has commissioned a series of trade studies to define a new architecture intended to integrate the three existing networks that it operates, the Deep Space Network (DSN), Space Network (SN), and Near Earth Network (NEN), into one integrated network that offers users a set of common, standardized, services and interfaces. The integrated monitor and control architecture utilizes common software and common operator interfaces that can be deployed at all three network elements. This software uses state-of-the-art concepts such as a pool of re-programmable equipment that acts like a configurable software radio, distributed hierarchical control, and centralized management of the whole SCaN integrated network. For this trade space study a model-based approach using SysML was adopted to describe and analyze several possible options for the integrated network monitor and control architecture. This model was used to refine the design and to drive the costing of the four different software options. This trade study modeled the three existing self standing network elements at point of departure, and then described how to integrate them using variations of new and existing monitor and control system components for the different proposed deployments under consideration. This paper will describe the trade space explored, the selected system architecture, the modeling and trade study methods, and some observations on useful approaches to implementing such model based trade space representation and analysis.