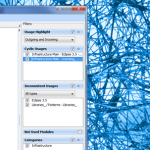 This article gives details of common undesirable situations users have encountered while working with a Teamwork Server repository containing multiple projects. All of these situations can easily lead to more serious problems such as: data loss, duplicated and inconsistent data, and lost time from cleaning up errors.

We suggest an easy way to identify and remedy issues in the early stages using the new MagicDraw capability – Project Usage Map.

No Magic’s Teamwork Server is software that allows more than one user to work with the same model. The model is stored centrally in the Teamwork Server repository and every modeler working with either MagicDraw, Cameo Business Modeler, or Cameo Enterprise Architecture may collaborate on the same project.

The Project Usage Map allows for representing projects and their dependencies in two views:

Using the Project Usage Map you can easily do the following:

If you are developing a large model that has several dependent parts, it is advisable to split it into several modules (a module is a project which has shared packages which other projects can use). Partitioning enables reusability of components in different projects and may improve performance on very large projects when modules are loaded selectively. Also, different users can work on their own projects which are part of another bigger project. Users can be assigned with different access rights in each module and versions of each module are tracked separately in Teamwork Server. When the number of users grows, the number of projects and usages between them grows too. Large numbers of usages makes it difficult to understand and validate them from a single project perspective.

It becomes important to manage the Teamwork Server repository efficiently. You would like to identify, analyze and validate dependencies between projects. If you have multiple projects in the repository, this task becomes difficult or even impossible without dedicated tools.

Note. You only need to be connected to your Teamwork Server repository from MagicDraw in order to invoke Project Usage Map.

The Project Usage Map shows project usages (i.e. directly and indirectly used projects which are visible from the selected project) in a graph. Graph nodes are individual projects and graph edges are usages. The Usage Map has two views:

After reviewing the entire repository and identifying problems you can dive in to an individual project view to view its usages in detail. 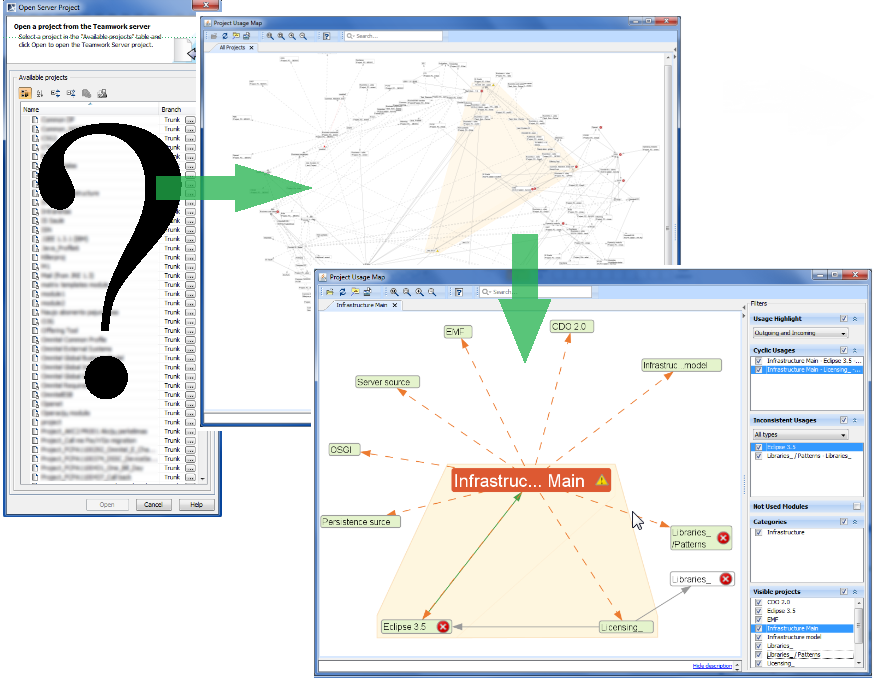 Both views have the capability to filter information by projects and categories. Your filter settings will be saved so you can continue your analysis next time you launch Project Usage Map.

All Cyclic Usages Are Valid

When a project decomposition is used, the project is split into smaller projects. You can benefit from this decomposed project – you need to load only small part of the project instead of all of it. This reduces complexity and even improves performance.

In addition to this, you would not expect and most likely not care to load the remaining parts of the main project each time you open a single part of it. This can happen if you have cyclic usages i.e. project parts are using the main project. Typically, such usages increase complexity and reduce performance. Figure 3 and Figure 4.

Also, if the project takes part in a cycle, it can’t be reused as a totally independent part in another project. Other projects taking part in the cycle will be automatically used as well.

Cycles are often a symptom of unintentional usages, created unknowingly by the user.

They can often cause further problems – such as inconsistent mounting points or module version usage inconsistencies. 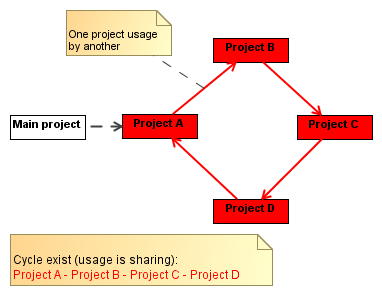 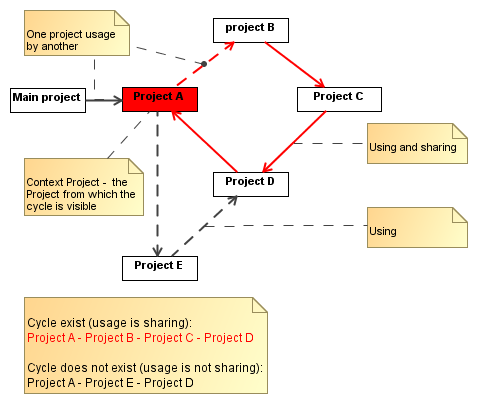 Sharing usage shows project parts which are exposed to other projects. In the above example (depicted in the Figure 4), usages are represented as dashed lines and sharing usages are represented as solid lines. Shared packages of Project C are visible for Project A because project B is using and sharing Project C. But Project B shared packages are not visible for Project D because Project A is only using (but not sharing) Project B.

Project A depicted in Figure 4 is a project from whose perspective the cycle exists, i.e. the cycle is formed out of sharing and using and ordinary relations.

The Project Usage Map automatically identifies cycles and highlights them in the Repository View. You can then open a Usage Map for the suspected projects participating in a cycle to analyze it more closely and if necessary – break usages that cause cycles.

You will therefore get multiple usages of the same project. This is normally not a problem. However several problematic cases can occur: 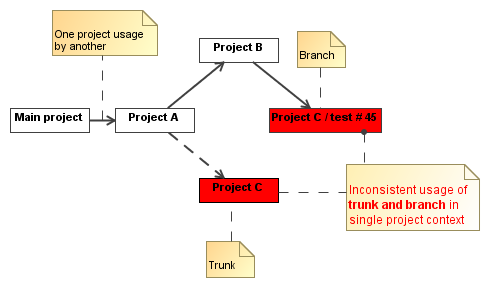 All of the above cases are inconsistencies which may be difficult to understand without a specialized means. All of them could cause user confusion, loss of time and even lost data in some cases (careless editing in case of read/write modules).

The Project Usage Map highlights these inconsistencies. You can then open projects with inconsistent usages and fix them by unifying the used project version, branch, or mounted package information.

All modules are Required and used

When the number of projects in the repository grows it is common for some of the projects to become outdated or not used anymore. You would prefer removing them BUT you are not sure if they are not used by some other, still-active project.

The Project Usage Map highlights unused modules. Based on this information, you can move all of them into the deprecated category or remove them entirely from the repository.

Let’s imagine you have analyzed the Project Usage Map results. They are graphical and visual however, you would like to save them not only as a picture, but also into model form – to be able to create your own validation rules to check the usages and their properties. Also, you may want to compare the usages you have now with the ones you will have in the NEXT two months. Or additionally, you nay wish to compare an actual and a typical map to find inconsistencies. In order to accomplish this, use action to export the Project Usage Map directly to the model and everything is saved. 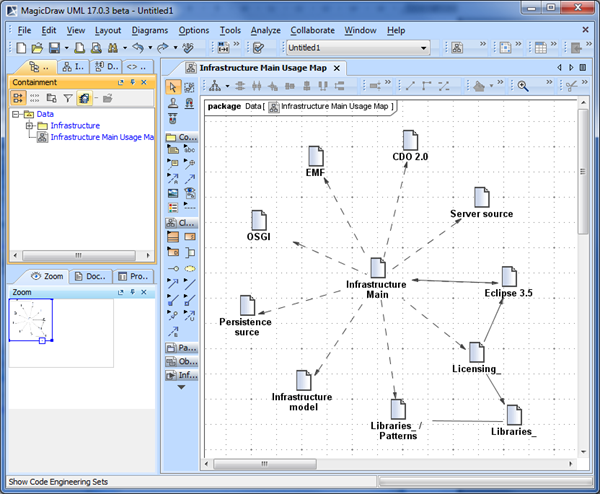