SysML allow both structural and behavioral modeling of the system. SysML models can be formally interpreted and executed. Ones executed analysis can be performed at system level. Ones we are good with simulation results we can prototype. Using programmable Lego Mindstors NXT for prototyping is an out of the box way to test and demonstrate future system behavior. We can use same system model to control and calibrate prototype.

In the first article from the series of two we will create automatic transmission system model in SysML, describe transmission controller behavior, analytical model, user interface, and execute the model.

In the second part we will connect SysML Transmission Model to Lego Mindstorms NXT gearbox. Model will control switching between gears.

The purpose of a simulation is to gain system understanding without manipulating the real system, either because it is not yet defined or available, or because it cannot be exercised directly due to cost, time, resources or risk constraints. Simulation is typically performed on a model of the system.

“This is an important development since it requires minimal configuration, can be used earlier in the lifecycle and can evolve as the design matures.”

“Executable UML is the next logical, and perhaps inevitable, evolutionary step in the ever-rising level of abstraction at which programmers express software solutions. Rather than elaborate an analysis product into a design product and then write code, application developers of the future will use tools to translate abstract application constructs into executable entities. Someday soon, the idea of writing an application in Java or C++ will seem as absurd as writing an application in assembler does today.”

Modern transmission consist not only from mechanical parts but also from electronics. Transmission control unit (Figure 1) controls gearbox and switch between gears based on many car parameters. 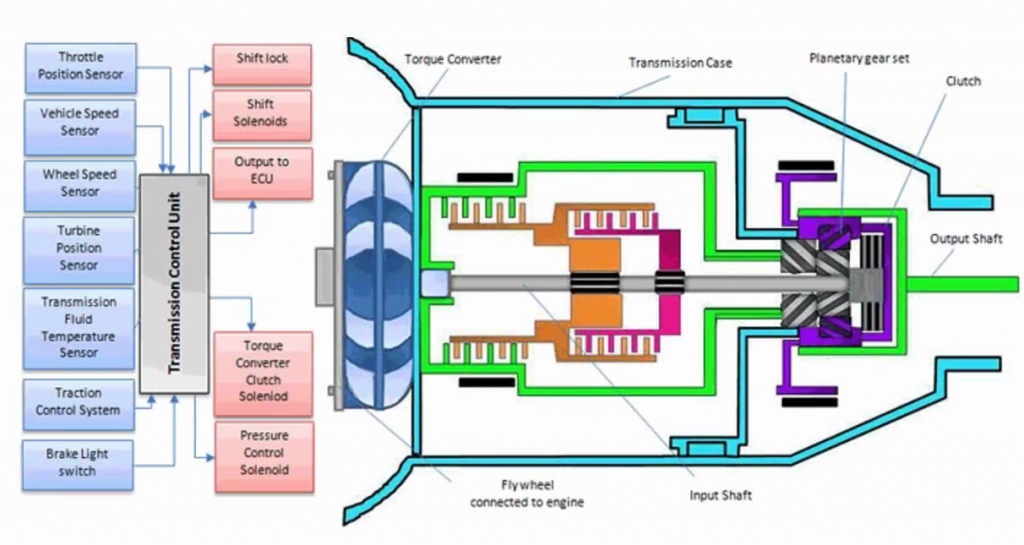 Structure of the Model

To describe transmission controller and demonstrate how gears in the gearbox are changed we will create:

We will combine all the diagrams to have one system behavior description. We will add UI and will execute model.  We will setup automatic requirements verification.

Behavior of the Transmission

For behavior part of the transmission we will use State Machine diagram. State machine describes possible states of a particular block and transitions between states. In Figure 2 we see simple state machine which can be executed by its own without context – structural part of the system.

If we want update value properties depending on state, for example active gear (Figure 3), we need context which will hold those properties. 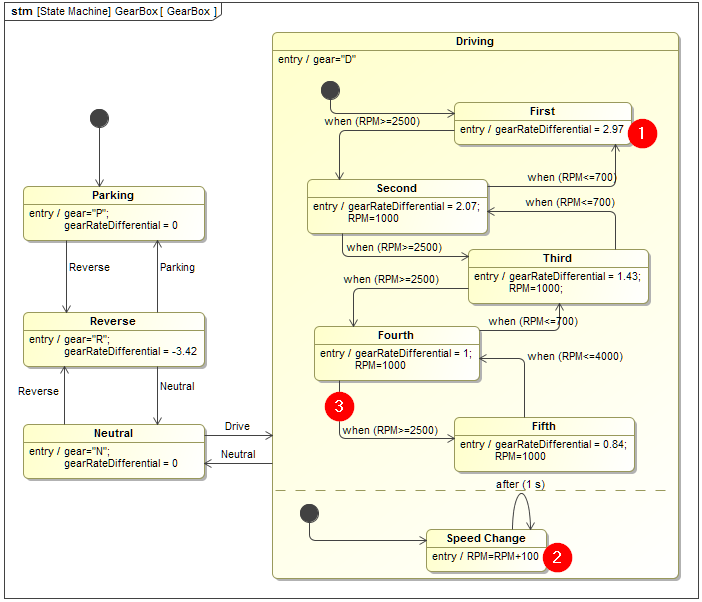 Structure of the Transmission

We will describe structure of the transmission with block definition diagram (BDD) (Figure 5). BDD is used to define blocks in terms of their features and structural relationships with other blocks. In SysML, systems are built from basic structural elements called blocks. Blocks include features that allow us to describe same real-world attributes in a system model.

Note that state machine is owned by block which behavior it’s represents (Figure 6). 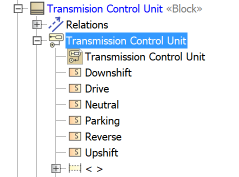 Figure 6. State machine shall be in the context of the system which behavior it describes

Project Structure is important. Behavior descriptions need to be contained underneath the element which is executed. Executable element can only have one main behavior. Recommendation for the main behavior which controls other behaviors is to use State Machine Diagram. State Machine diagram can be enriched with other behaviors e.g. start activity on enter to state, or execute code as effect of switch between states.

We defined behavior description and connected to structure. Now we want to enrich model with more parameters and want to do additional static and dynamic calculations. For these tasks we need to create parametric diagrams.

Our goal will be to calculate vehicle speed from engine Revolutions per Minute (RPM). We will use following four (Figure 7) mathematical expressions. We will formalize them in SysML constraint blocks. 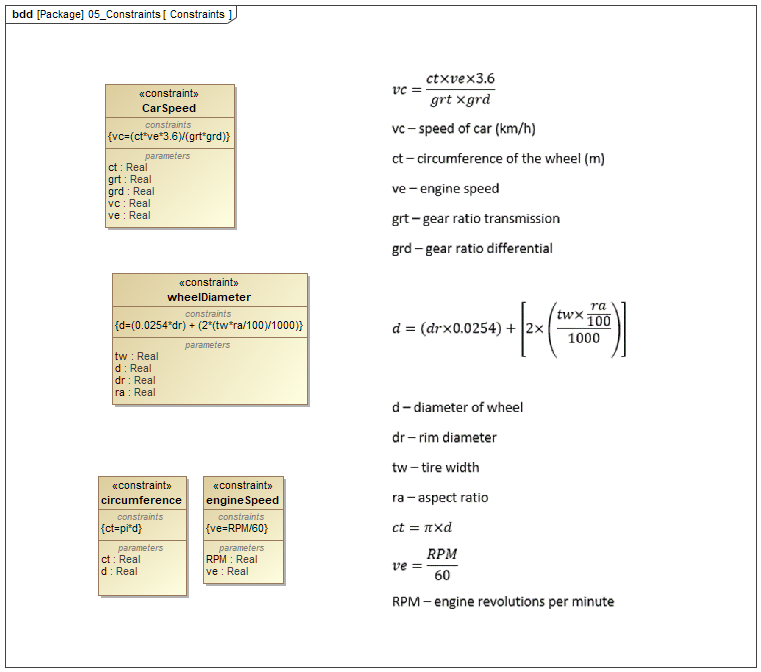 As an input we will need wheel characteristics (Figure 8). 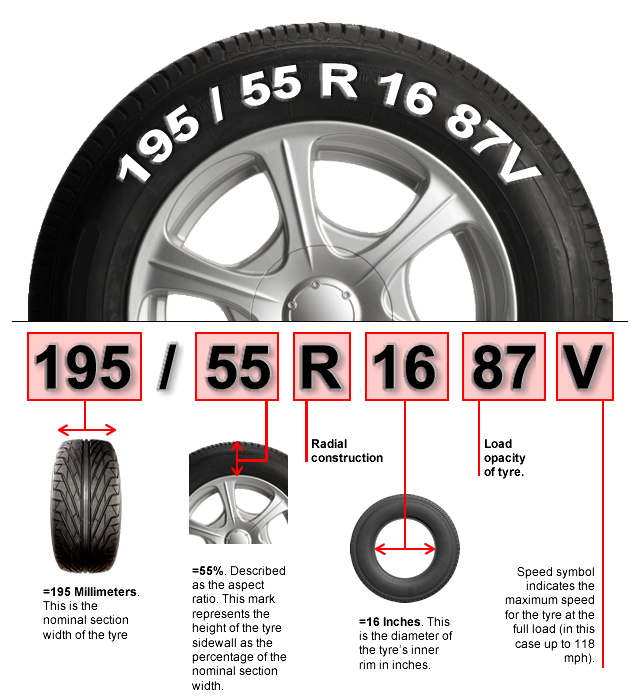 We will create value properties in Transmission Control Unit to hold inputs, intermediate, and result values of analysis (Figure 9). 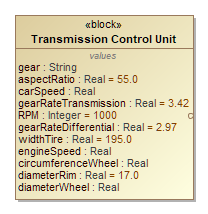 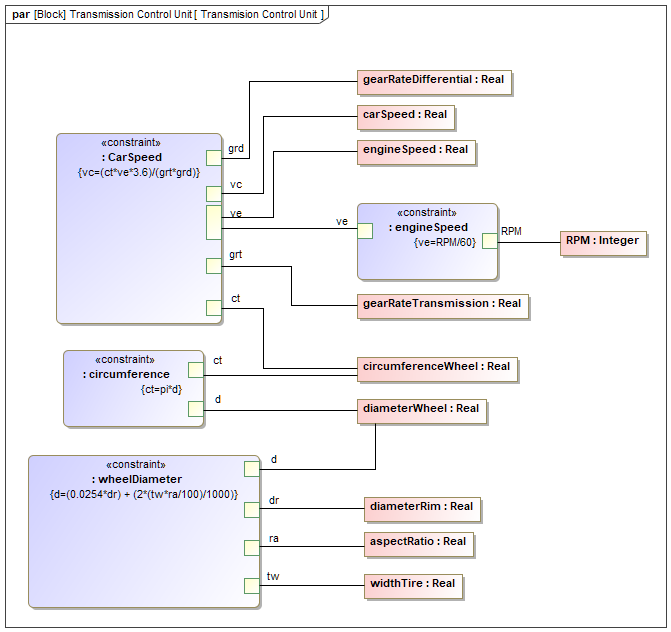 Figure 10. Parametric diagram to calculate vehicle speed based on RPM

We will execute parametric model to get results based on the inputs. Execution of mathematical models expressed as SysML parametric diagrams enables automatic dependent parameter value updates at any time during simulation. Mathematical expressions can be solved using build-inn math engine or well-known math solvers. 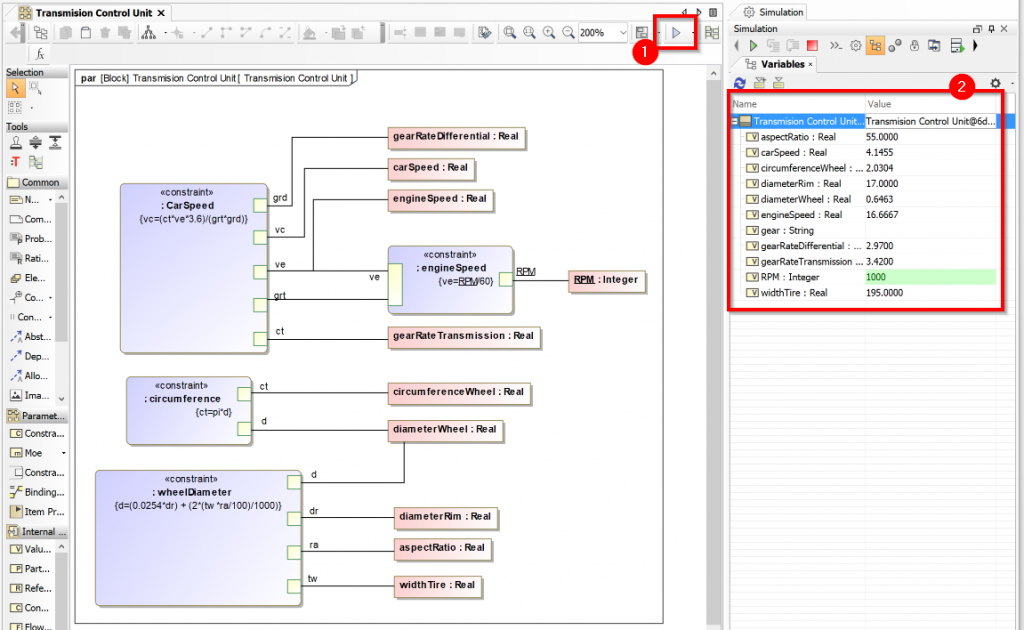 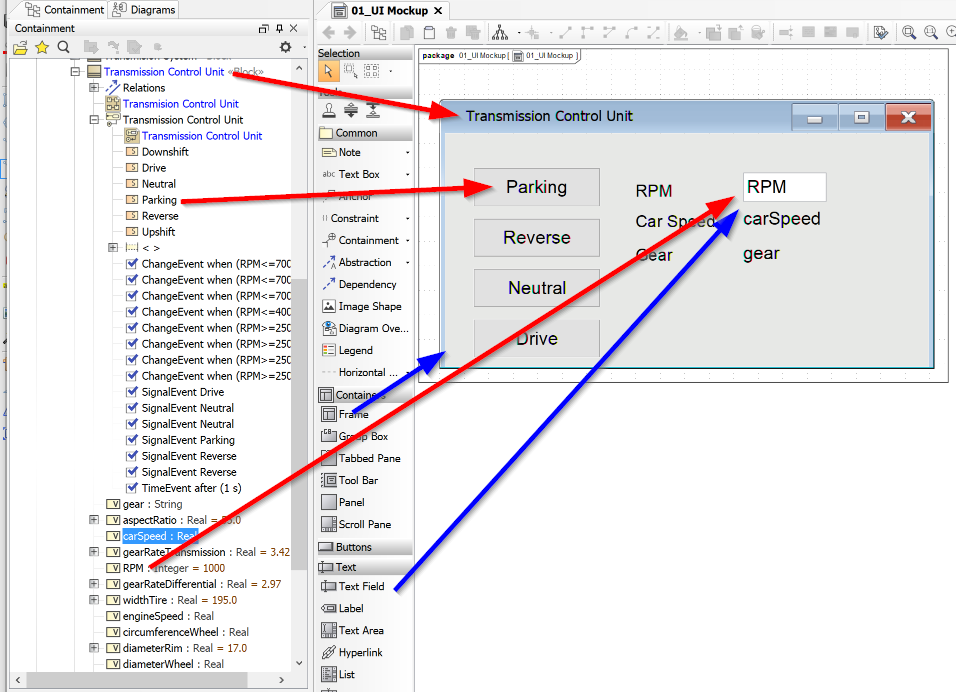 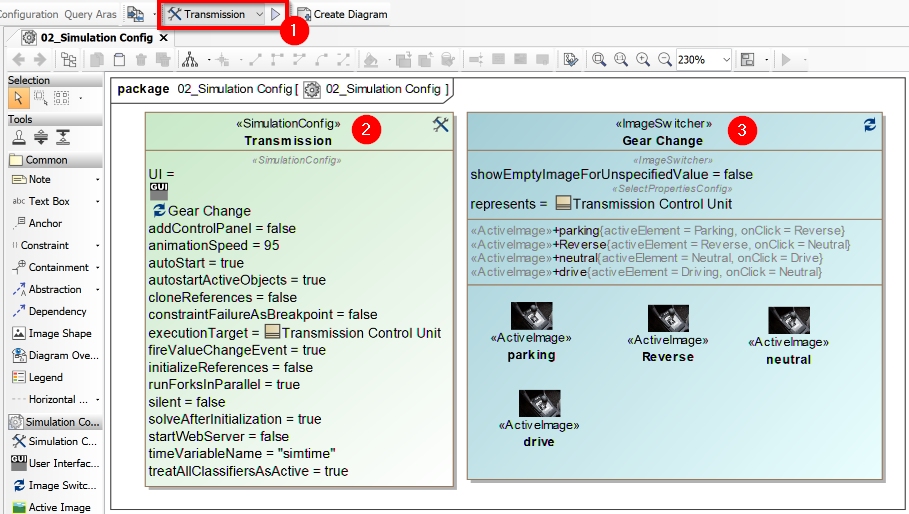 For automatic requirements verification we will create satisfy relation from Transmission Control Unit block property RPM to requirement which it shall satisfy (Figure 14). With help of model execution and analysis we will check is value of this property (and design) satisfy requirement or not.

Note that in simple cases manual requirement refinement with constraint block is not required. Natural language analysis capability available in modern modeling tools recognize text pattern based one predefined and customizable ones and create constraint automatically [1].

Is used to define what elements needs to be executed, what UI used, and all execution related properties, charts, results and input location.

Project Structure is important. Behavior descriptions need to be contained underneath the element which is executed. Executable element can only have one main behavior. Main behavior is defined with property “Classifier Behavior”. Recommendation for the main behavior to use State Machine Diagram. State Machine diagram as a governing diagram

As OMG fUML execution model is used as foundation for all kinds of executions, but does not support statemachines, SCXML engine is wrapped to fUML Execution interface to fill this gap and provide complete integrated execution of different UML behaviors. It allows calling Statemachine in CallBehaviorActions, use Activities to define entry/do/exit activities of the State, use SendSignalAction to trigger Transitions in the Statemachines.

It should be contained in the structural element which needs to be executed.

Reusable elements (Interface Blocks, behaviors (if not the main behavior) signals, Constraint Blocks, etc.) can be contained anywhere in the model.

There are situations where you want to describe how two independent subsystems communicate with each other. Signals send by one block behavior can control another block behavior e.g. trigger sate transition (Figure 15). This task can be performed in the tool but requires to have:

Activities which are used to send signals can be connected to state machine diagram and invoked during execution as effect on transition or as behaviors performed on Entry/do/exit from state (Figure 16).

Figure 16. Part of state machine which user’s activities as effect on transmission to send signal

Instead of simple RPM we could have probability based RPM described in activity diagram (Figure 18). 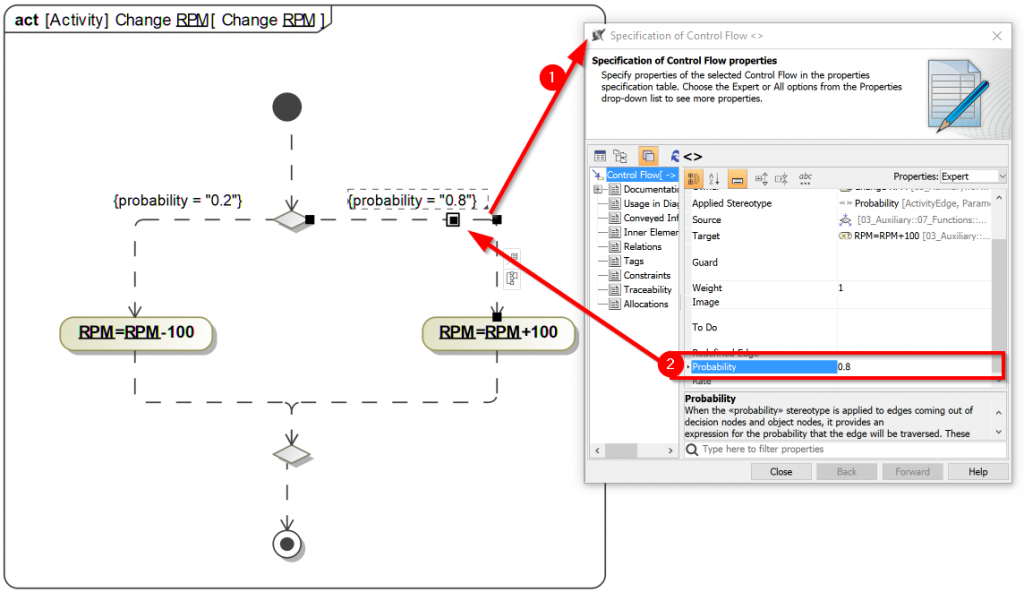 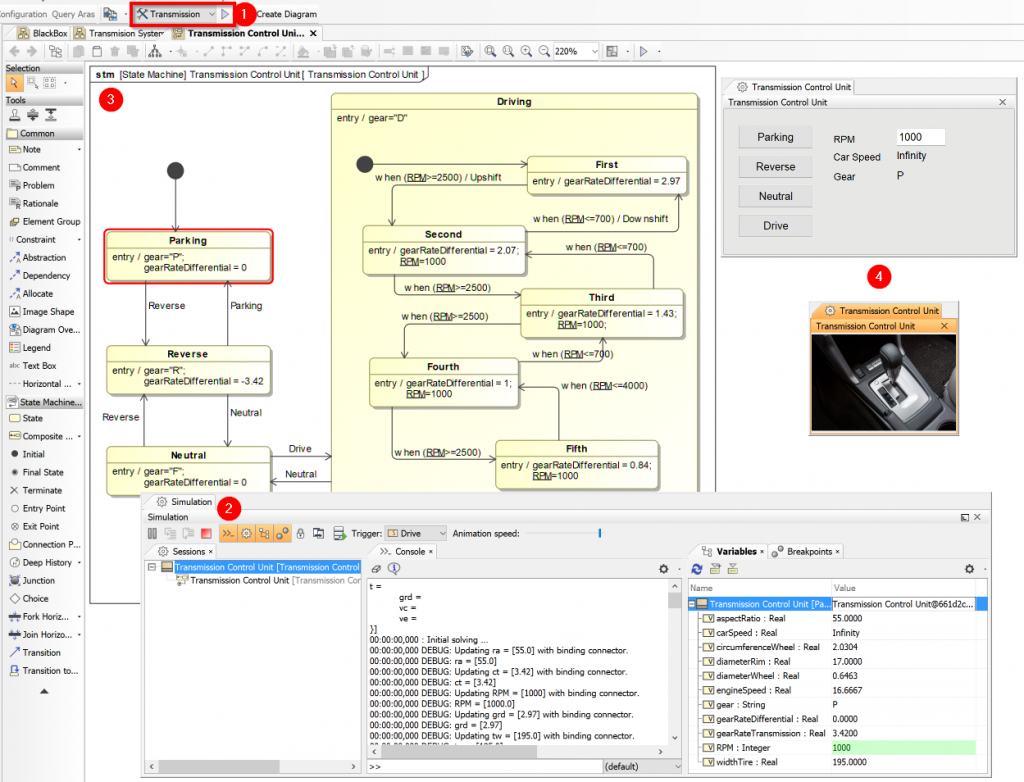 Perform analysis to find the best switching between gears or gears rate differential and optimize transmission system for fastest acceleration (Figure 19). For this save execution results into instance or file and compare between different configurations.

In the second part of the article from the series we will connect SysML Transmission Model to Lego Mindstorms NXT liner gearbox (Figure 20). Model will control switch between gears. 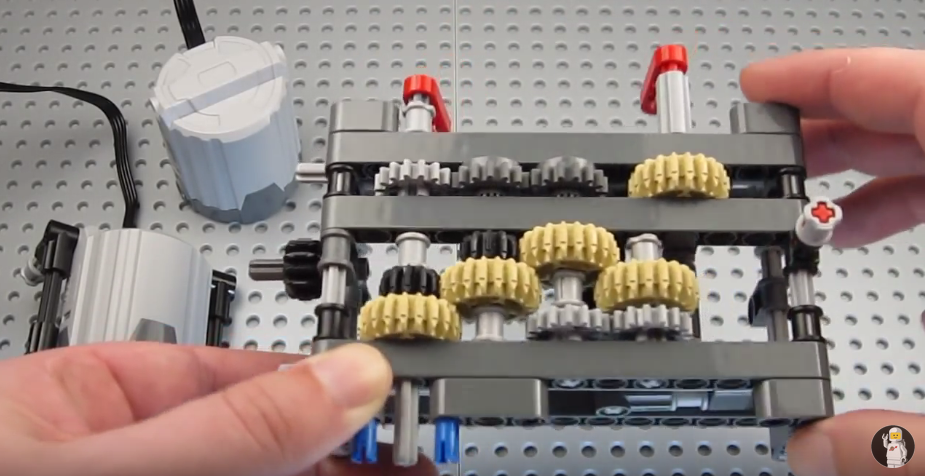 For more about Cameo Simulation Toolkit and Lego Mindstorms NXT integration refer to [2].

The Cameo Simulation Toolkit provides the first in the industry extendable model execution framework and infrastructure based on number of standards:

The standard based model execution of:

Zilvinas is a Solution Architect at No Magic Europe. His expertise area is model-based systems engineering (MBSE) with special focus on model execution.

Zilvinas has an engineering degree from Kaunas University of Technology (Lithuania) and almost 10 years of work experience in this field. He also holds the OMG-Certified Systems Modeling Professional (OCSMP) certificate.

Zilvinas is responsible for consulting and delivering the solutions to customers. He occasionally writes papers and produces training material (slides, samples, practical assignments).