When you need to visually identify the particular information of the element, you should go to the specification of that element or display this value in the compartment of that element symbol. Starting with 18.5 version of MagicDraw, this can be achieved in more simple and compact way – by changing the element’s symbol appearance on a diagram using legends.

Legends provide a quick way to visually distinguish elements. Symbol colors and icons defined in a legend allow you to instantly indicate and recognize information about elements, such as property values. Legends have been significantly improved with MagicDraw 18.5. You can now change symbol appearance according to the specified condition. See Figure 1. 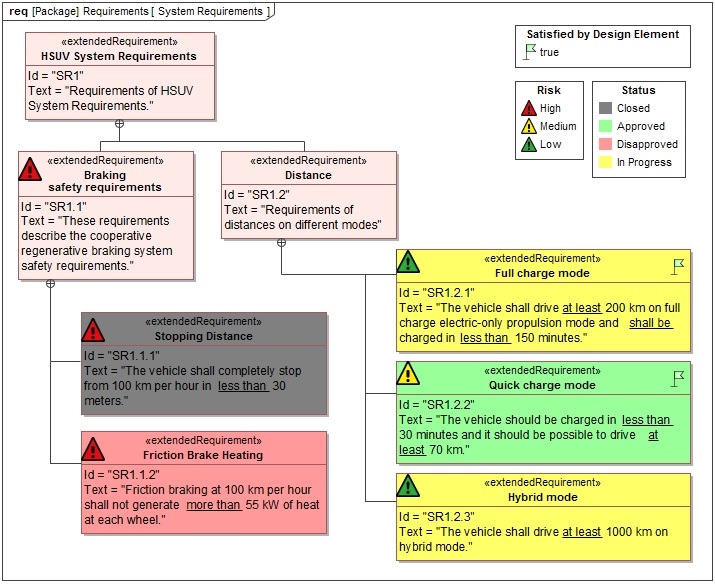 Figure 1. The multiple aspects of the requirement in one view.

As you can see in Figure 1, the diagram represents multiple aspects of requirements. The properties of each requirement are represented through symbol colors and icons. For example, the “Quick Charge Mode” requirement is of medium risk (yellow warning icon), has the approved status (green fill color) and is satisfied by design element (green flag icon). All of this information can be seen in one diagram, at a glance. Therefore you don’t need to check it in the Specification windows of individual elements.

You can create legends by using the button located in the “Common” group of the diagram pallet. Legends serve as grouping elements for a set of visualization elements called legend items. Legend items can be created directly from a legend symbol, as illustrated in Figure 2. 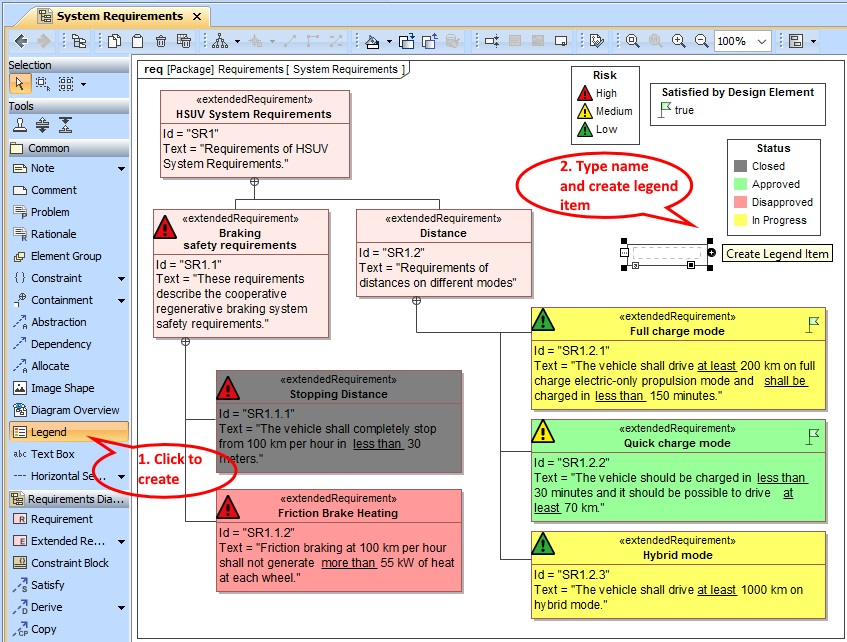 A legend item defines the representation of an element symbol. In order to change symbol appearance, you can specify symbol fill, line, background colors and icons. Legend items can be applied to elements in two different ways:

The second method utilizes a new Property Test operation which simplifies the specification of the condition that checks the value of an element property. All you need to do is select an element type, choose the desired property and specify its value. See Figure 3. 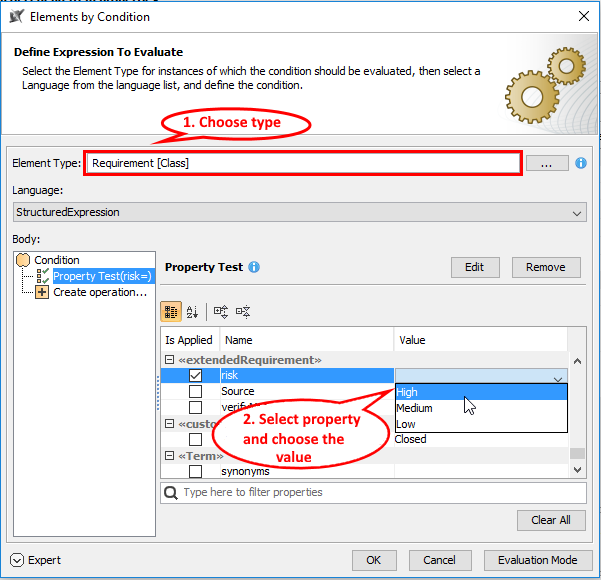 A legend item is then applied to all model elements that contain the specified property value. 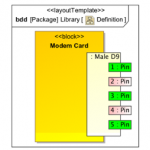 Creating blocks and defining their ports are one of the most common tasks performed by systems engineers. These elements are reused in the entire model. Therefore, it is very important to maintain the same appearance of the block as defined in a Block Definition diagram, especially when they are used as parts of the system.

MagicDraw has evolved with a unique port layout mechanism. Beginning with MagicDraw version 18.5, this new functionality allows you to keep the same appearance of parts and their ports positions each time you represent them in different diagrams, as illustrated in Figure 1. 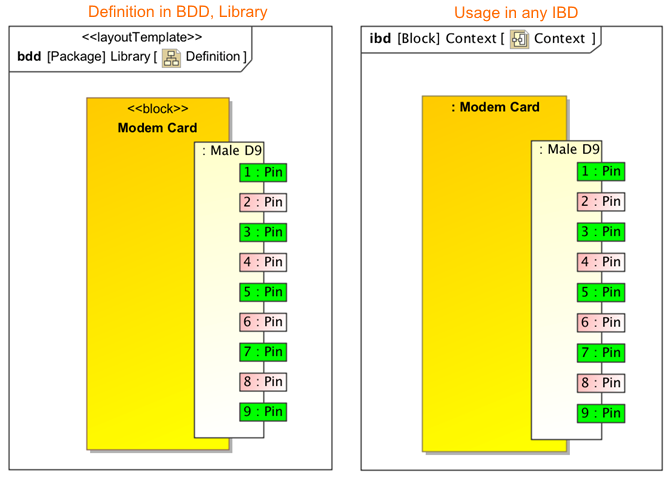 Figure 1. Usage of a layout template.

To utilize the smart port layout and style functionality, follow these steps: define the appearance of the block symbol, set that visual definition as the layout template, and apply the layout template for the particular part. See Figure 2. 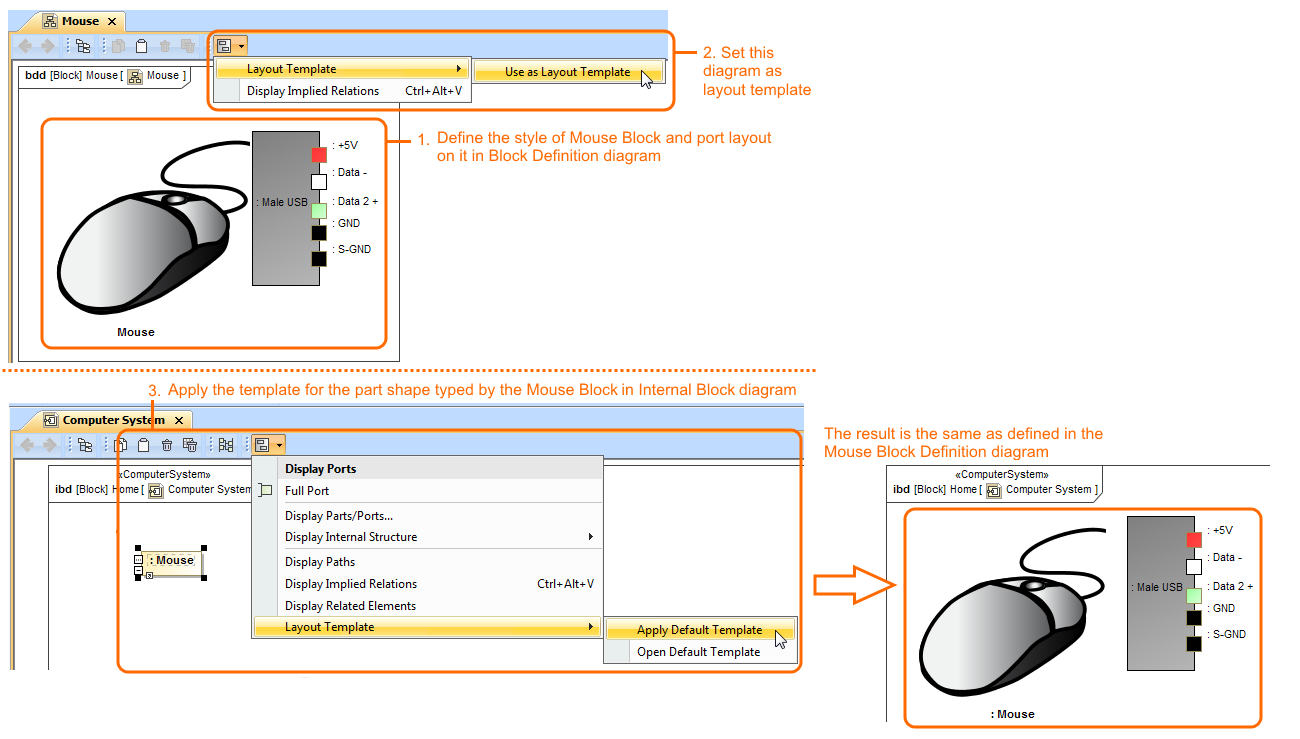 Figure 2. The workflow of setting and applying the ports’ layout template.

Multiple layout templates allow you to represent the same block with a different appearance according to the context where this block will be used. For example, the same USB port position on the Mouse block can be represented in two different ways, as in Figure 3. 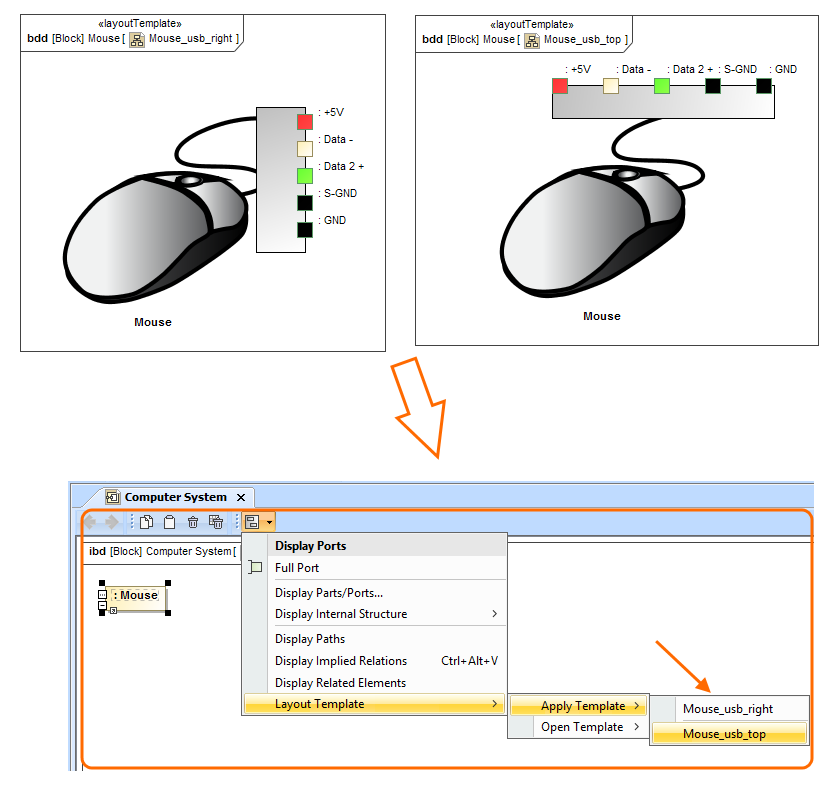 To do this, you need to define the multiple layout template diagrams with different names that identify the selection (see Figure 3). If you have a commonly used layout template, you can set it as the default. 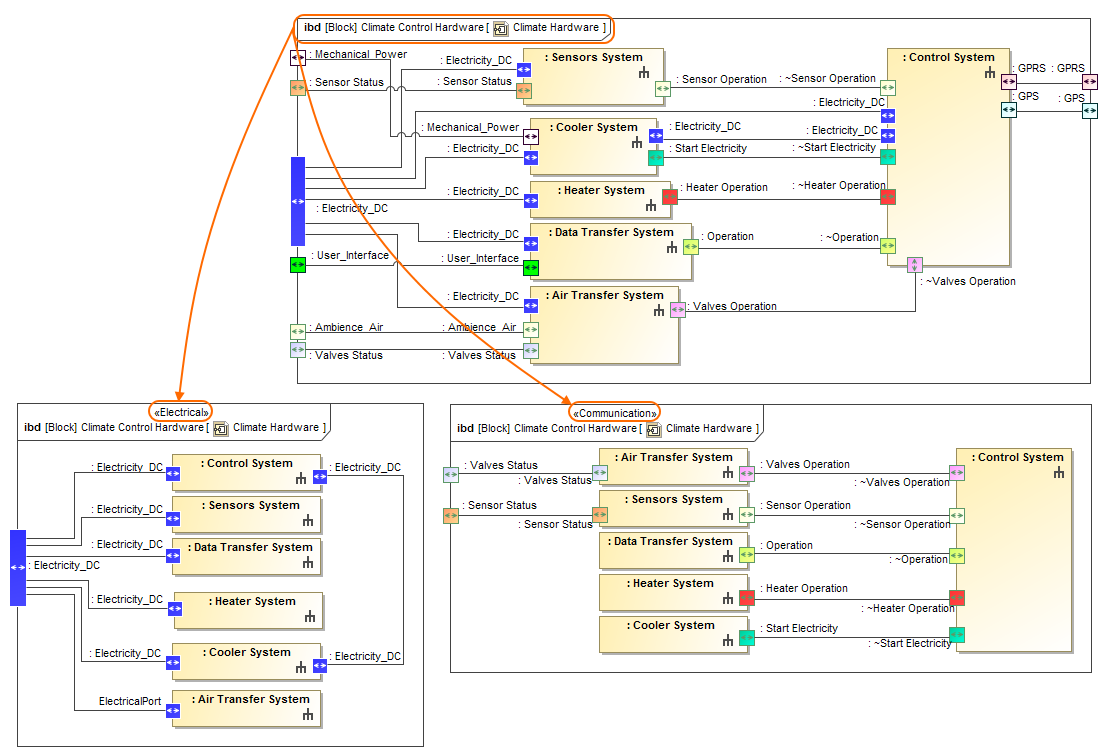 The Block Definition Diagram, when used as a layout template, can have a specific diagram aspect defined. Now, the layout template can only be used in another diagram with the same aspect. 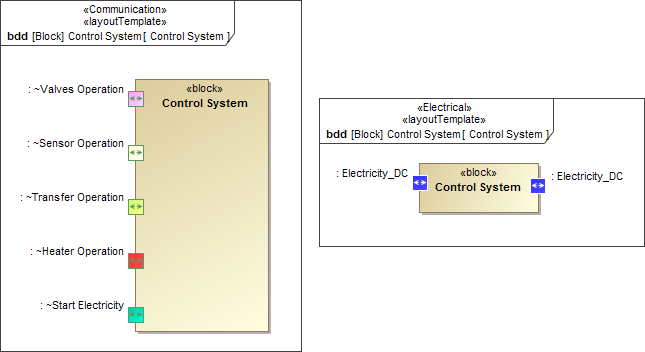 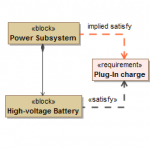 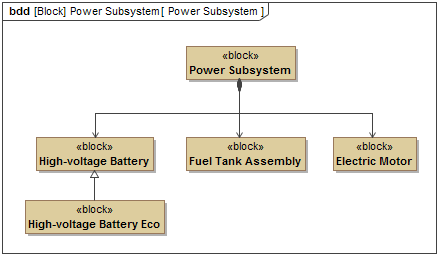 In this example above, composition and inheritance structures between blocks are displayed. If a composite part depends on a particular element, the whole element also depends on this element. The same situation exists with inheritance between blocks. Inherited elements indirectly depend on the elements to which a parent element has relations.

Beginning with MagicDraw version 18.3, indirect relations (we call them implied relations), can be displayed on the dependency matrix. Take a look at the following image. 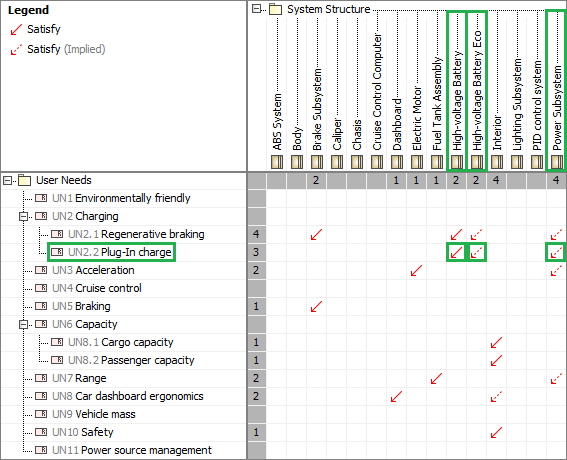 Moreover, implied relations can be caused not only by generalization and composition. Take a look at the diagram and matrix below: 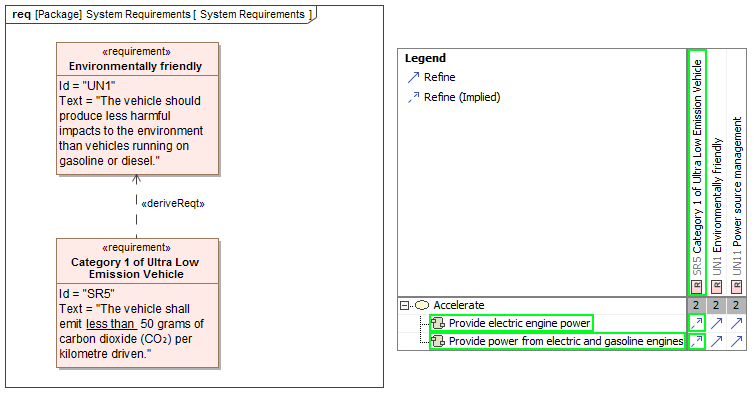 In this case, the Category 1 of Ultra Low Emission Vehicle requirement is derived from the Environmentally friendly requirement, which is refined by Provide electric engine power and Provide power from electric and gasoline engines activities. According to this, implied refine relationships between activities and derived requirement are displayed.

To show implied relationships, simply select the Implied Relation operation in the Dependency Criteria dialog and choose needed criteria from the drop -down list as shown here: 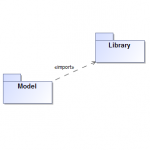 System designs are created at different levels of abstraction. There are two problems implied by this statement:

Beginning with MagicDraw version 18.3, users can save time to avoid these previously mentioned situations. There are two mechanisms to facilitate custom scope capability.

To improve modeling productivity, users can use Model elements instead of Packages. In this way, element lists are restricted to elements that are owned within the Model element. Here is an example:

Another way to improve modeling productivity is to model context-specific scopes. All that is needed is to create Package Imports between packages. In this way, lists of types are restricted by imported elements only. Here is an example:

In the example above, a systems engineer uses specific value types from the ISO-80000 library in a specific scope. In another scope, the engineer may choose to use other types, thus improving modeling productivity when there is a need to identify the right types and elements. 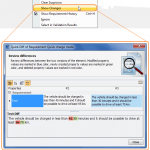 Requirements that have been changed are not marked as suspected. Only elements that are linked to changed requirements are marked as having suspect links. Suspected model elements are highlighted in yellow and marked with a small triangle symbol.

If users are working with a server (CEDW) project, the ability to review changes made in requirements is available. According to these changes, users can update suspected elements and clear that suspicion. 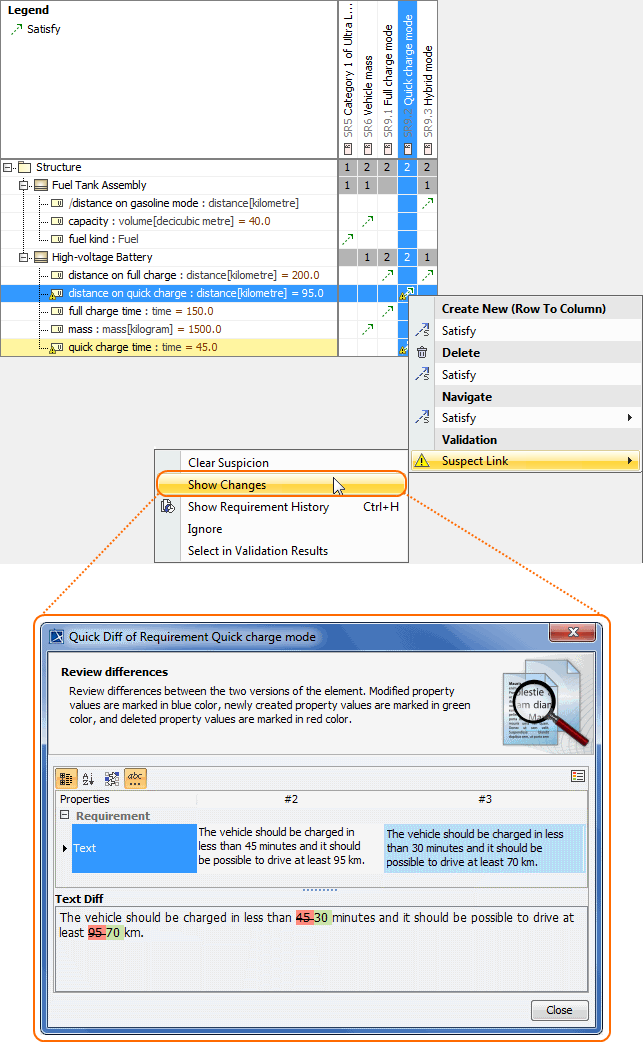