The demand for support of business vocabularies in model-driven development becomes more and more evident. Yet this is being left out of focus by the majority of modeling tools vendors. Today, there are very few modeling tools which offer the functionality to manage business vocabularies and use them as an integral part of the whole system development project; none of the analyzed tools use any widely accepted standard for describing such vocabularies. In this post, the basic aspects of the implementation technology of semantically rich business vocabularies in modeling tool environments are presented. The solution is based on a novel OMG standard “Semantics for Business Vocabularies and Business Rules (SBVR)” and is implemented by making use of the extension mechanism of Unified Modeling Language (UML) and reusable functional components of the modeling tool, MagicDraw.

In general, a business vocabulary (BV) may be defined as a set of “specialized terms and definitions of concepts that a given organization or community uses in their talking and writing in the course of doing business” [1]. Being a part of business model, a BV greatly contributes to the intra- and inter-organizational communication as well as various other activities of business process management (BPM). Moreover, business models become an integral part of the systems development life cycle. Current results of our open-ended survey [2] on the applicability of BV show that over 80 percent of respondents use some kind of BV in their projects as well.

Despite the actual demand for support of BV there are very few modeling tools which offer this functionality to manage and use vocabularies as an integral part of the whole development project and beyond. Moreover, even these few modeling tools do not support any widely accepted standard for describing vocabularies, which is an essential shortcoming for any kind of model, especially in model-driven systems development. We believe this situation is caused by objective circumstances. While considering the implementation of a standard-based BV support in a modeling tool, one should take into account the following:

In this post, basic aspects of the implementation technology of semantically rich SBVR Business Vocabulary (SBVR BV) in a modeling tool environment are presented. The post is structured in three sections: first, the results of analysis on current support of BV in modeling tools are discussed; next, basic aspects of the proposed implementation technology are introduced by presenting the UML profile for SBVR BV and DSL to support the model-driven specification of core SBVR concepts, and the adoption of the existing glossary capability of the modeling tool MagicDraw; the last section concludes with the results.

The analysis of current status of BV support in modeling tools was carried out in two stages:

Results of the first stage of analysis revealed that BV support in modeling tools is still immature – most of the tools did not have such thing as BV at all, not to mention the management capabilities. Three modeling tools: Enterprise Architect [5], Visual Paradigm [6] and MagicDraw [7] were selected for the second stage of analysis (Table I) as they had support for BV management, although none of them supported SBVR standard.

TABLE (I).  Comparison of the selected CASE tools (against primary features related to BV management)

As a result, MagicDraw was selected as the most appropriate implementation platform. In addition to a good coverage of the primary features, MagicDraw provides useful secondary features to encourage the usability of SBVR BV in the CASE tool, such as, creation of new BV entries from the existing textual content in any model (e.g. UML, BPMN) of the project, highly customizable reporting, advanced search capabilities, comprehensive user guides.

The value of UML profiling is well-known and widely discussed ever since the introduction of this extension mechanism by OMG to the UML standard. Currently, OMG has officially introduced fifteen UML profiles for various standards; modeling tools vendors also develop their own UML profiles to support a greater variety of OMG standards, e.g. MagicDraw supports UML profiles for the development of SysML, SoaML, UPDM and other models. Nevertheless, neither OMG, nor any modeling tool vendor, has yet introduced a UML profile for SBVR.

In Figure 1, we present a UML profile for SBVR BV developed by our research group. The profile was developed in two basic steps: 1) the official EMOF metamodel of SBVR was imported into the modeling tool MagicDraw; 2) EMOF metamodel concepts were transformed into corresponding UML stereotypes, thus extending MagicDraw’s native UML metamodel. The extensions were made with regard to general recommendations for UML profile presented in SBVR standard (Annex C in [1]).

It should be mentioned that the proposed UML profile for SBVR BV can be successfully implemented in other modeling tools supporting UML extension mechanism as well. However, the profile alone is not enough to start using SBVR BV in a modeling tool. Another step in the SBVR BV implementation process is the development of specific DSL for the profile, which is a tool-specific task. 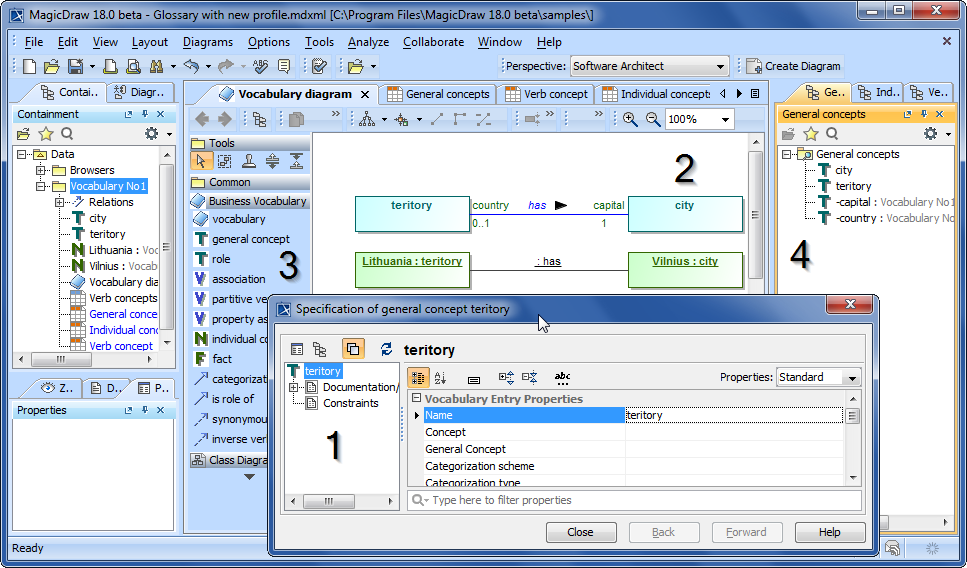 In our solution, the DSL was created to meet certain requirements for model-driven specification of SBVR BV (Figure 2). Distinctive features of this solution are:

In addition to UML profile for SBVR BV and DSL customization, we adopted the existing MagicDraw’s Glossary capability. For each developed BV model one may now create one or more glossaries simply by dragging and dropping selected BV concepts into glossary table (Figure 3). Descriptions of glossary entries are inherited from BV concept’s definition, which is one of the default properties of a BV concept.

Having a glossary created for a BV model gives the following usability and model integration advantages:

One of the distinctive features of SBVR is that this standard supports more than one representation of BV concepts. A business vocabulary can be represented graphically, i.e. via BV diagrams, which we have already presented, or in textual form, e.g. in Structured English (as well as any other language of one’s choice). To complete our solution, we used MagicDraw’s Reporting capability to generate a textual specification for a BV model. Such specification can be opened, interpreted syntactically and managed by our earlier developed SBVR editor – VeTIS tool [9].

At the core of the presented solution is the UML profile for SBVR, which can be adopted by any UML-compliant modeling tool and thus popularizing the use of standard-based business vocabularies in model-driven development.

This is the part of the article which will be presented by Skersys, T., Pavalkis S., Nemuraite, L. at 4th Symposium on Computer Languages, Implementations and Tools (SCLIT2014) at 12th International Conference of Numerical Analysis and Applied Mathematics (ICNAAM 2014).