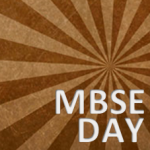 No Magic and the University of Huntsville in Alabama (UAH) joined together last Thursday to host a one day Model Based Systems Engineering session (MBSE Day) for the local Huntsville community. We are proud to say the event was a resounding success. Over 50 people representing both industry and government attended to learn more about applying MBSE concepts using SysML and MagicDraw. Based on these results No Magic intends to schedule more of these events in Huntsville and in other hubs across the country. So make sure you follow updates on this blog and at NoMagic.com to have the newest information about our next workshop event.

The event featured multiple speakers, each describing different important aspects of MBSE. No Magic’s own team of Jason Wilson, Tom Pender and Kevin Jones gave presentations on topics related to MBSE, SysML notation and the use of our tool suite to bring them together. Additionally, Monte Porter of CSC and David Arterburn from the UAH also presented. Monte, a long time user of MagicDraw, presented the first topic on how MBSE can positively impact the Joint Capabilities Integration and Development System or (JCIDS) process. Later in the afternoon, David presented on the work that UAH and his division at Rotorcraft are doing in regards to MBSE and how it can benefit the local industry.

Overall the event was a great experience for us as well as the attendees. Their support along with the UAH just shows why Huntsville is the leader in science and aerospace engineering fields.

More about No Magic, Inc. MBSE solutions can be found at http://www.nomagic.com/mbse/

Dr. Richard Soley, Chairman and CEO of the Object Management Group (OMG) and Executive Director of the Industrial Internet Consortium, will be the keynote speaker at this year’s No Magic World Symposium, scheduled for June 7-10, 2015. The event, held at the Courtyard by Marriott in Allen, Texas, provides insight into industry technologies as well as improving collaboration to ensure project success in the world of technology.

Dr. Soley is responsible for the vision and direction for two of the most well-known consortia in the technology standards industry as well as for the Industrial Internet. He joined OMG as Technical Director in 1989 where he was instrumental in the adoption of the original CORBA specification. He also led the way in the development of vertical market standards and modeling as early as 1996, which led to the Unified Modeling Language and Model Driven Architecture that followed. In 2014, Dr. Soley became Executive Director of the newly-founded Industrial Internet Consortium, which will be featured at the No Magic World Symposium.

In addition to providing insight into the goals of the Industrial Internet Consortium, Dr. Soley will present the keynote address on the afternoon of Monday, June 8, 2015. The keynote is titled “Standards: OMG Looking Ahead” and will discuss how OMG views standards adoption as the starting point rather than the end of the process. Dr. Soley will present information on how his organization is using industry standards to improve program delivery.

The No Magic World Symposium provides attendees with the insight of experts like Dr. Soley with more than 50 interactive breakout sessions in four tracks. Not only will attendance learn more about the Industrial Internet Consortium, and how industry standards will look in the future in Dr. Soley’s informative breakout session, but the No Magic World Symposium will offer a wide range of speakers, workshop leaders and industry specialists with messages geared specifically for technology experts throughout the world.